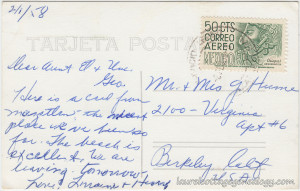 A few brief facts:  Mazatlán is the second-largest city in the Mexican state of Sinaloa, and situated on the Pacific coast.  The city’s name is a Nahuatl word meaning “place of deer.” The larger hill rising up out of the ocean, on the right, is Cerro Crestón, atop which is El Faro Mazatlán, the highest lighthouse in the world at about 500 feet above sea level. Cerro Crestón today is described as part of the city, but is stated to have been an island before a connecting land mass was built to it. (Another account I read was not sure if this was correct.) Hmm, it appears to be an island in this photo. The city was founded in 1531 by an army of Spaniards and by indigenous settlers. German immigrants helped develop it in the mid-1800s into a thriving seaport; Banda, a brass instrument based form of traditional Mexican music came about through the Bavarian folk music influence, and another tie to Germany is that the brand of beer Pacífico, was started by three Germans in around 1900. It’s still brewed there today (but also in Mexico City) and you can take a tour of the plant. Mazatlán is a popular tourist spot and well-known for it’s beaches and cliff divers. (The only trouble with researching destinations is that it always makes you want to jump on a plane and go. Why not?)