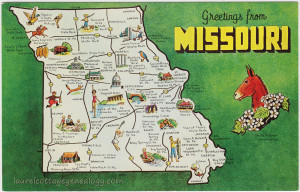 That’s a mule proudly representing the state from his garland of hawthorn flowers. The Missouri mule was designated as the state animal in 1995. Mules were introduced in the 1820s in Missouri, popular with farmers because of their hardy nature, pulled covered wagons of pioneers moving west, and played an important role in transporting WWI and WWII troops and supplies.

Per a Wiki entry the population listed here was recorded for the year 1950, so this postcard is likely from the early 1950s.