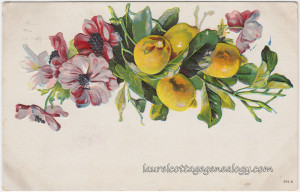 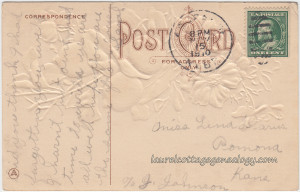 The sender wrote,  “Did you think I had forgotten you, well I havn’t but ain’t had time to write. we are all well hope you are the same. from cousin Sarah.”

I love this one because of the unusual combination on the front of lemons, and I believe those are poppies. Whoever the artist was certainly got it right, as far as those lemons, and their leaves and stems (from someone who has a lemon tree.) We don’t have poppies here at Laurel Cottage (though would like to) but they seem very well done, also.

This is the first one posted in the “Lena Davis Collection.” There will be many more to come. She is a cousin of our friend J. W. Carter, whom we’ve had the pleasure to get to know a little from his postcards to Lena. The Lena Davis cards will not be in date order, as I prefer to post the holiday cards around their proper date, plus wanted to get this one and the following post up as they pertain to publisher E. Nash, about whom not much is known, as of the date of these posts. And also, if you’re following this E. Nash “not much is known about” mystery then please see the prior post, as well.

So, this postcard was done by an unknown publisher or printer, whose logo appears on the back of the card at the bottom right, which is a capital “A” inside a circle, or two capital “A”s inside a circle, depending upon your point of view. The postcard header is very distinctive, (very cool) and the design around the “C” in Card may remind you of a spiral staircase. This header design appears in all the postcards that I’ve seen (so far) with the “A” in circle logo. Shortly after this we start seeing this header with “Copyright E. Nash” appearing to the left of the spiral design. So, perhaps Nash bought out the unknown publisher or printer that did this postcard. This one is dated 1910 and the following one I’ll post is dated 1913. This is just a theory. I don’t know if any other publishers used the spiral design, or the exact dates involved for these two guys (assuming they were men.) We’ll see what else comes along to clarify all of this in the future, and post something accordingly.