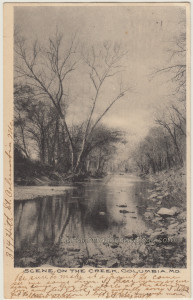 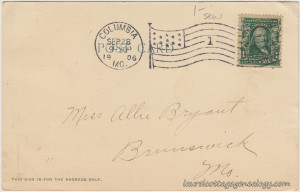 The sender wrote,  “Be sure to make it a point to come see me some time. If there is an excursion come[?]. Give the girls at the store my love and tell Edith I’m awfully sorry I didn’t get to see her before I left. Write me some more letters please.  [?] C. Margaret F.[?]   314 Hitt St. Columbia Mo.”

The U. S. City Directories for Columbia in 1909 show a Miss Margaret Faller rooming at 314 Hitt St; a student at the University of Missouri. She is also listed in the U of M school yearbook Savitar in 1909, as of member of the Home Economics Club, estimated born 1889. (No photo, darn!) Impossible to say for sure, but it would be a good bet that this Margaret would be the same person that wrote this postcard to her friend, Allie. Allie Bryant was found in the Federal Census records for 1900 and 1910; two census records for 1910 actually, which is somewhat unusual, but not unheard of.

One of the 1910s shows Allie and her family living in Brunswick, Chariton County, Missouri:  parents Daniel A. (occupation farmer) and Bettie W. Bryant; children Allie B., (born Missouri about 1885, saleswoman for a general merchandise store), Edna A., Louis M., Harry C., and Earle F. The other 1910 census, taken in Triplett, Chariton County, shows Allie is boarding with head of household Nora B. Allega[?] and others, and working as a sales lady in a general store. Both census records were taken in April, about a week apart, so Allie may have just been visiting her family when she was listed on that census. But, her occupation coincides with friend Margaret’s request to be remembered to the girls at the store.

The creek in the photo is another matter entirely. Which local tributary was called “the creek”? Nothing was found to shed any light on this subject as of the date of this posting.