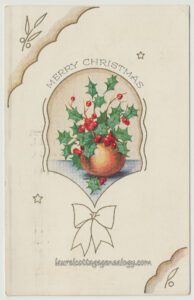 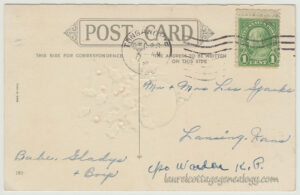 A cute design for this card, with its bowl of holly, quite adorable bow and dainty stars. (Seems unusual that the artist used a brown “pen” to draw with  – but that’s part of the charm of old postcards.) The prior post was from the same unknown publisher and dated 1927, so we started with an estimate of 1920s and went from there. The senders, Babe, Gladys and their boys, lived about 17 miles southwest of Lansing, Kansas.

The addressees are Kansas natives, James Leslie (or Lesley) Sparks, born about 1901, and wife, Mary, born about 1902. They were married August 8, 1923. Mary’s maiden name was Throckmartin, middle name Ver (apparently a family surname).

James appears as Leslie Sparks on the 1920 Federal Census, and as J. L. Sparks in city directories found online. Their home was in “Tonga City” and he worked at the Kansas State Penitentiary in Lansing when this card was sent, hence the added, “c/o Warden K. P.”

The 1925 State Census shows James L.’s occupation as written below. (Wow, tricky.) But this is standing for he “mans a service station”.

On the 1930 Federal Census, James L. is listed as unemployed. The record refers us to line number 3 on the Unemployment Schedule, however that information appears to have been lost. It’s possible that he may have been employed at the penitentiary and temporarily laid off, or he may not have not started working there until later in 1930 or as late as 1934, per that city directory.

The town, Tonganoxie was named after a Delaware Indian Chief.