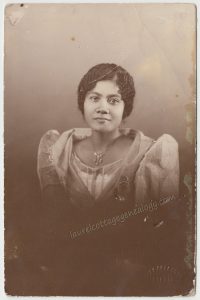 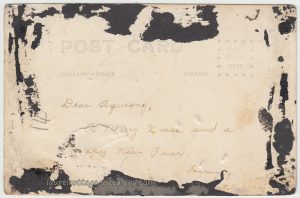 A beautiful young woman in the traditional Filipino dress, baro’t saya, is posing for this portrait that was taken at the Juan Dela Cruz Studio. An unrelated online image was found on Flickr listing this studio location as Tondo, Manila, Philippines, and with an estimated date for that image as 1927. Our photo above of the unknown beauty may have been taken around this time, as well. The broader time frame of circa 1924 – 1949 comes from the AZO stamp box style on the reverse of the card.

The sender of this RPPC signed the back of the postcard but unfortunately, her signature is mostly covered by the black photo album paper the card had been glued to. We can only read what looks like the last two letters of her name (e-t). She wrote: