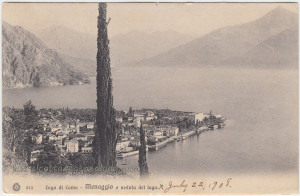 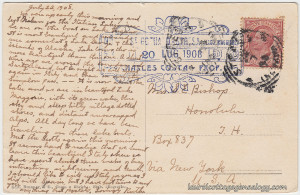 Here’s an Italian postcard with a major Hawaii connection.

This 1908 postcard in black and white shows Lake Como and the town of Menaggio, Italy with lovely verse by the sender:

“July 22, 1908. We were up early this morning and left  [?] for the Italian Lakes. Now we are on the boat on Lake Lugano. It is most beautiful and reminds me somewhat of Lake George & the islands of Alaska. Lake Como tho is more beautiful than this one. A short time ago we crossed the boundary into Switzerland, but to night we will spend again in Italy and then on over the Simplon Pass. – – It is now about 1 hr. later and we are in beautiful Lake Maggorie with its green water, blue sky and steep village dotted shores, and distant snow capped Alps. All day long we have been traveling on these lake boats. Met the Scotts again this morning. It seems hard to realize that we must leave this beautiful Italy where we have almost three weeks of busy interesting sightseeing and travel. I should like to write up Italy for you as I did with Spain, but I have not time to send anything but postals. Lovingly Ruth.”

After looking through a number of online records, I believe the sender to be Ruth Cornelia Shaw, and the addressee her grandmother Cornelia Ann (Sessions) Bishop, wife of the Rev. Sereno Edwards Bishop. S. E. Bishop was a Protestant missionary, born February 7, 1827, Kaawaloa, Hawaii of missionary parents Artemas Bishop and Elizabeth (Edwards) Bishop, the parents being part of the “second wave” of early missionaries to come to the Islands. A fascinating account by S. E. Bishop appears online, entitled Reminiscences of Old Hawaii, which includes photographs of himself, his wife, the couple on their anniversary with their children and grandchildren, his father Artemas Bishop, and the mission residences. S. E. Bishop, according to the norm for missionary children, was sent outside of the Islands, in his case back to the U.S., for his formal education, where he met his future wife (the addressee of this postcard) Cornelia Ann Sessions. They were married May 31, 1852. Cornelia Ann was the eldest daughter of the Rev. John Sessions and Eliza (Winne) Sessions. Cornelia was born in New York, January 12, 1826, and died in Honolulu, February 29, 1920.

Many references can be found online for Sereno E. Bishop. One of the most interesting things about him though, is that he is the person that became internationally famous for correctly identifying the reason for the “circles around the sun” which appear after a volcanic eruption. These circles were named after him and are called “Bishop’s Rings.” Lorrin A. Thurston writes the preface for Bishop’s Reminiscences of Old Hawaii, and gives a wonderfully colorful first-hand account of the “halo-like rings possessing a metallic glitter, around the sun” and how “the whole western heavens glowed with the intensity of an incandescent electric light” because of which Thurston and the baseball team he was on at the time, were able to play ball later into the evening than normal. These, at the time unexplained, phenomena were the result of the August 26-27, 1883 Krakatoa eruption.

Granddaughter, Ruth Cornelia Shaw is the eldest daughter of Elizabeth Della (Bishop) Shaw and Jonathon Shaw, born May 27, 1885 and died January 23, 1932, both in Honolulu. She was a graduate of Columbia University in New York. Some quick city directory searches show her working as a teacher in Honolulu and later as having received her Masters Degree in Education in 1930 from the University of Hawaii. The online record for a Ruth C. Shaw, student, age approx. 21, in the Boston Passenger Lists is very likely our postcard sender. This record shows she traveled on S.S. Saxonia, from Liverpool, England on September 8, 1908, and arrived in Boston on September 17, 1908. This must have been the journey taken after having (reluctantly from the sound of it) had to leave the European trip that she so eloquently describes here, in part. Her grandmother Cornelia, would have been 82 years old when she received the card and probably not doing much traveling by that time. One imagines, from reading the postcard, that Ruth enjoyed writing, as much as Cornelia must have enjoyed receiving the prior “virtual tour” of Spain and the postcards she received like this one. 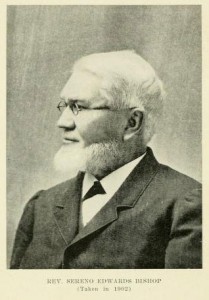 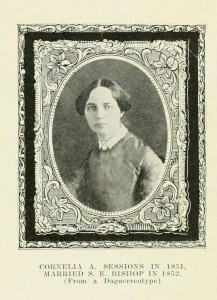 Photos above from Bishop’s Reminiscences of Old Hawaii