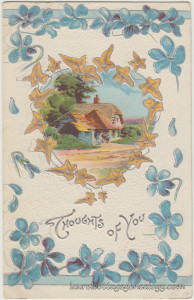 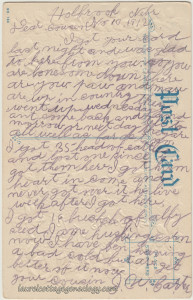 “Holbrook Nebr, Nov 10, 1912. I got your card last night and was glad to here from you. You are lonesome down there are you. paw and maw are up in country they went up wednesday and ant come back and tell tomorrow or next day they are all well as far as I no. I got 35 head of cattle and lost one since i got them here. I got him[?] heart in come and never got over it he live week after I got here. I got 16[?] bushel of alfy seed. I ame husking corn now. I have ben having a bad cold but are get better of it now. your cousin  J. W. Carter”

A really nice one from J. W. that says a lot, including how he was noticing that Cousin Lena sounded lonesome, Pa and Ma are up in the country, he lost the one cow or bull that sounds like had a heart problem (poor baby), he is busy husking corn, he got what looks like sixteen bushels of alfalfa seed (love the “alfy”  expression), and his bad cold is getting better.

This beautiful postcard bearing the inscription “Thoughts of You”  shows a thatched roof cottage scene with a visitor being greeted at the door. (If you look closely you will see some figures there.) The heart-shaped scene is surrounded by brown or gold ivy (not sure why the ivy was done in this color but it’s still nice) and then by forget-me-nots. There’s a light blue bar at the top and bottom of the card. The forget-me-nots and ivy are highlighted with silver-tone lines, (a nice departure from the more common gold) and their placement on the card is elegant.

Divided back, embossed, unused with writing. Publisher unknown. No. 184. 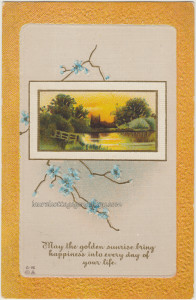 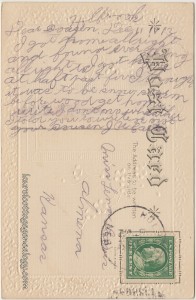 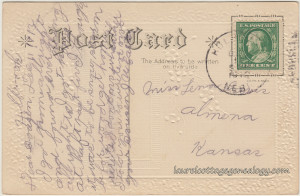 “Holbrook Dec. 11, 1912. Dear cousen. I got home all right and found ever thing all right to. I got home at haft past five. I thought it was to be snow storm be fore wood get home. I dont no wheather I told you to write or not. your cousen   J W Carter”

You can see where J. W. had started to put something like “write soon”  but then changed his mind while wondering whether he had already asked that of cousin Lena before he left.

On the front is a small, muted country scene of a golden sunrise reflected off of a lake or pond, a rustic fence in the foreground and a castle ruin type building in the background. There is a branch with blue forget-me-not type flowers artistically displayed behind the “painting.”  The card has a gold border, and shows the lovely sentiment below:

“May the golden sunrise bring

happiness into every day 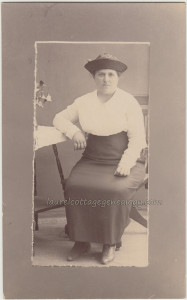 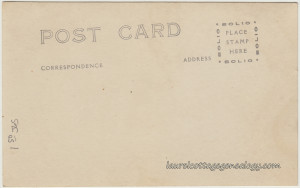 I love this one and every time I look at this woman’s photo I imagine that she is from Montréal or Québec. I don’t know why. Maybe she has French Canadian heritage. The Solio stamp box dates the card in the broad time period of about 1903 – 1920s, but I would place it at around 1913 or so, after searching for examples of high-waisted skirts, and ladies blouses. The hat appears to be made of straw, and has a little decoration that is appearing above the brim. It is probably best labeled as a Breton, sometimes called Bretonne. From the excellent Shappos website, this style is described as a  “women’s hat with ample round crown and brim turned-up all around.”  What looks to be an ivy plant on the left in the photo, is looking rather wilted, to the point of wanting to reach in and water it.

Solio is a type of what’s called “printing-out” paper that was used by photographers and produced by the Eastman Kodak Co. 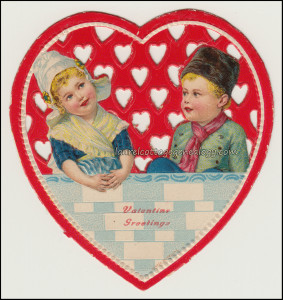 Heart-shaped valentine of Dutch girl and boy in traditional regional costume. The young couple is shown sitting behind a blue and white wall, that shows the printing “Valentine Greetings.”  Behind them is a background of red with heart shapes cut out of the card. Embossed white border on red. A beautiful little valentine. 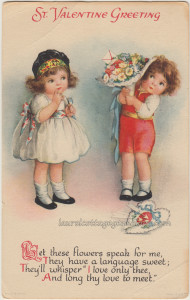 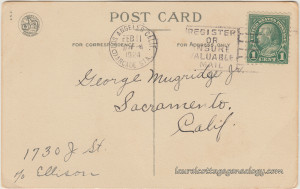 Let these flowers speak for me,

They have a language sweet;

They’ll whisper “I love only thee,

And long thy love to meet.”

Beautiful St. Valentine’s postcard from 1924 showing the above verse and a little boy about to give a bouquet of flowers with a note and trailing blue ribbon to a little girl. At the bottom right of the scene is a lace valentine with three arrows that have found their target.

The card is addressed to “George Mugridge, Jr., Sacramento, Calif., 1730 J St. % Ellison”  This postcard is the first of a large private collection from a friend’s family. 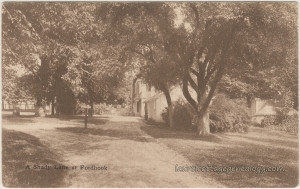 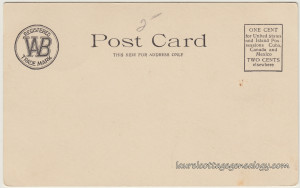 The logo on the back of this postcard shows the initials W A B and the words “Registered Trade Mark” inside of a circle. These initials stand for Washington Atlee Burpee, (1858-1915)  founder of the famous seed company, W. Atlee Burpee and Co., better known as just Burpee Seeds. This publisher logo was in use at least as early as 1898 and at least as late as 1914, as confirmation on the logo can be found at the bottom right corner of the covers of two vintage farm and seed annuals that are displayed on the Burpee website (see the last source listed below). Fordhook is the fifty-plus acre historical farm of the Burpee Company, located in Doylestown, Pennsylvania.

The name Fordhook is also well known as the variety of lima bean developed by Burpee. The Fordhook lima is from the prolific bush type plant, which produces the larger beans, rather than the baby limas. My own dear mother-in-law, Pamela, (who never cooked from a recipe) taught me to simmer frozen limas with butter, garlic, salt, pepper, and plenty of water, as they need to cook down to tender in what becomes a beautiful lima-ish garlic butter sauce. Pam was from West Virginia and grew up in a coal mining area, where beans were a staple. She preferred the Fordhook variety, and on my way to the grocery store, always made sure to tell me to “get the larger ones, those are the best.”

On a last but not least note, if you’ve ever wondered where the Burpee name came from, according to the aforementioned website, the Burpee Family, well-established in Philadelphia, were descended from French Canadian Huguenots. The original name was Beaupe (Beaupé?) before having evolved into the anglicized name that it is today. 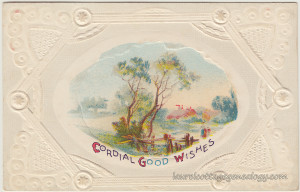 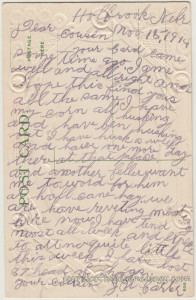 “Holbrook Nebr, Nov 15, 1914. your card came some time ago. I ame well and all right and hope this finds yous all the same. I have my corn all husking and have ben husking out. I have husk a week and have one more day there at that place. and another feller want me to word for him at holl cane hay. we are have reveting meeting here now I have tend most all week and expect to attend quite little this week. I have lost 37 head of hogs. your cousen  J. W. Carter”

The date on the card is either the 15th or the 18th. And I think J. W. was saying “hawling cane hay” with the phrase “holl cane hay” and of course, he meant “work” not “word.” As for “reveting,” this sounds like it might of been a Christian revival meeting. (Too bad about the poor hogs.) This is the last card in the series, unless we ever come across more. It’s been lovely getting to know J. W. (I love the way he says “I am well and all right”) and in getting a small glimpse into rural life in Holbrook, Nebraska in the early 1910s.

Country scene centered within an embossed hexagonal, lace-type white design. The scene shows a couple of trees next to a rustic wooden fence. A woman and child are walking up the path from the cottage-like home in the background. Underneath is the lettering “Cordial Good Wishes.”

Divided back, embossed, unused with writing. No. 805 from an unknown publisher. Circa 1914. 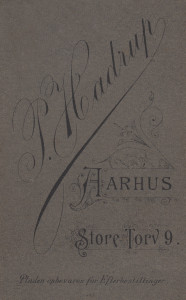 This is a cropped and cleaned up version of the back of the Carte de Visite photo we have. (See post under Bearded Man, Aarhus, Denmark.) This is only one version of the studio logo, as there is another found online that includes a drawing of the building that he was located in. The address, as you can see from the image, was Store Torv 9, in Aarhus. The phrase at the bottom on the back of the CDV, “Pladen opbevares for Efterbestillinger”  means the studio kept the original plate or negative for any possible future reorders.

In searching the database at Ancestry.com, we find two entries related to Peder Hansen Hadrup and Aarhus. The first is a marriage record for Peder Hansen Hadrup, age 22, born about 1831, who married Kirsten Andersdr Torup on October 21, 1853. Their place of marriage was Hundslund, Aarhus County, Denmark, Per a Wikipedia entry, this county was abolished on Jan. 1, 2007, having mostly merged into Region Midtjylland, with a small portion having merged into Region Nordjylland. The city of Aarhus is about 39 kilometers north of today’s city of Hundslund. The second entry is a baptismal record for Svend Morits Hadrup, born October 5, 1893 in Aarhus, with parents names given as Peder Hansen Hadrup and Karen Dorthea Sørine Petra Gormsen. So, we don’t know if either record pertains to our photographer or any of his family, but either or both are possible. 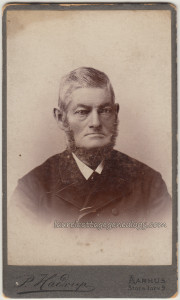 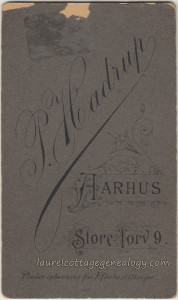 Carte de visite style photo of a bearded gentleman, possibly in his late 40s or early 50s. The beard type seems to most closely resemble the “Chin Curtain.” We also take note of his suit which shows lapels with trimming along the edges, and is that a pin in the shape of a cross that is showing on his cravat? The date for the CDV is estimated at circa 1875-1880.

The photo was taken at the P. Hadrup studio in Aarhus, Denmark, which was located at the address of Store Torv 9. The phrase at the bottom on the back of the CDV, “Pladen opbevares for Efterbestillinger”  means the studio kept the original plate or negative for any possible future reorders. The photographer is likely Peder Hansen Hadrup. See separate post under the Photographer category for more information. 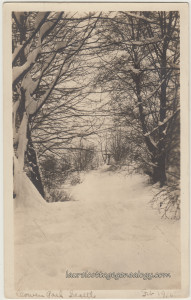 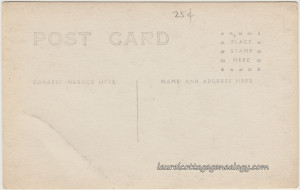 Real Photo Postcard from a photo taken in Cowen Park, Seattle, Washington. In the white border at the bottom of the card is written, “Cowen Park Seattle Feb 1916.”  From this shot we are looking down what seems to be a wide snow-covered pathway, flanked by deciduous trees, their branches laden with snow. What looks like the top of a utility pole appears in the background, and this is what clues us in to the fact that there was a “big snow” that winter.

In searching for confirmation on the weather I found a great vintage Seattle website that has other photos that were taken after the snowstorm. From this site I learned that the blizzard of 1916 was 21.5 inches and fell between February 1st and 2nd. As of the date of this post, this is the record for Seattle’s largest snowfall.