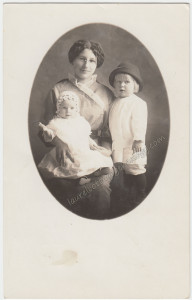 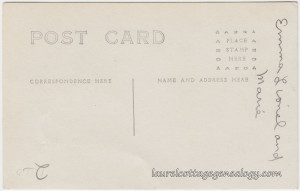 Real Photo Postcard showing a wonderful oval studio portrait of Emma, and her two children: toddler Lionel, and baby Marie. Although the back of the photo does not specify that the mother is Emma, I think we can presume that whoever wrote it would put the mom’s name first. I did some searching through the 1910 and 1920 U. S. census records but was not lucky enough to find any possible fit (what a time-consuming endeavor it would be to do a thorough search) but perhaps the photo will be recognized by a family member…..The stamp box is an AZO with four triangles pointing upward, so circa 1904 to 1918, but then with divided back puts it around 1907 – 1918. To pick out the details in these images is always interesting and revealing:  In this one I love how Emma is holding baby Marie’s hand; the look on Marie’s alert little face; Lionel’s blonde, blonde hair; his gazing off-to-the-side expression, and chubby cheeks; the lacework on Marie’s cap and sleeves; the contrast between Lionel’s dark hat, dark stockings and high button boots, with his white (or maybe very pale pastel) tunic and knickers; Emma’s stylish dress with the darker underside to the sleeves to match the darker waistline sash; her stand-up neckline trim of dotted lace and ruffle; and her eyeglasses which appear to be not eyeglasses at all, but a monocle with a pince nez, also called nose piece or nose bridge. 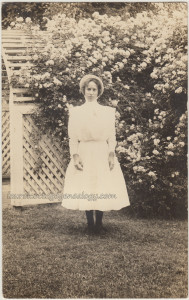 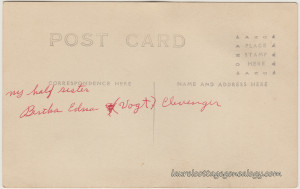 Real photo postcard with AZO stamp box (with all four triangles pointing upward) of a young woman who is identified on the back as,  “my half sister Bertha Edna (Vogt) Clevenger”, posing in a garden setting in front of a latticed arch, and what looks to be a well-established climbing rose. She wears a summery white or very pale colored dress, or perhaps a skirt and blouse, it is hard to tell, but with a high collar and a charming bonnet.

The Find A Grave website shows a Bertha Edna Clevenger, born October 30, 1901 and died June 1, 1977, and her husband is identified there as John Frank Clevenger, though his WWI and WWII draft registration cards show his full middle name as Franklin. Surprisingly, not much was found, as of the date of this post, for Bertha before she married John, and also nothing to identify her half-sibling. Records show that both Bertha and John were born in Tennessee. The 1930 Federal Census taken in Westmoreland Township, Imperial County, California, shows that Bertha was age 15, and John age 24, when they married, and show’s John’s occupation on the 1930 as Foreman for a vegetable ranch.