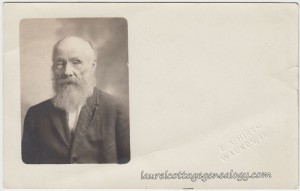 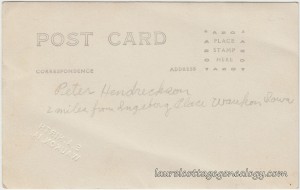 A Real Photo Postcard showing a lovely studio photo of an elderly, bearded gentleman with the name and location identified on the back as  “Peter Hendreckson, 2 miles from Ingeberg Place Waukon, Iowa.”  This one has the photographer’s stamp embossed on the front showing  “E. A. Hirth, Waukon, IA.”

Looking further back, on the 1880 Federal Census for Waukon, we find Peter Hendrickson, his wife Carrie, and their young son Henry, three months old, born March 1880, in Iowa. Carrie is approximately the same age as her husband, and also Norwegian born, of Norwegian parents.

The 1900 census for Waukon shows Peter and wife Karen, and two sons, Albert O., age 14 and Peter C., age 6. A daughter, Annie Mary Hendrickson was born about 1881, according to her marriage record to to Ole Severson in 1904. This record shows her mother’s name as Karen Annunson, but is spelled Amunson on son Peter Cornelius Hendrickson’s marriage record to Grace Kvamme (sp?) in 1925. Son Albert O. Hendrickson married Ida B. Vangen in 1915, and on this record mother Karen’s maiden name is spelled Amundson.

Though this particular type of AZO stamp box (two triangles up and two down) is estimated as being used between 1910 – 1930, Peter Hendrickson looks to be at least in his seventies in this photo, but possibly eighties or even early nineties. A Find A Grave entry was found for him which states he was born December 25, 1848 in Gran, Oppland Fylke, Norway, and died 1941 in Winneshiek County, Iowa. I would estimate this photo then between about 1925 – 1941, as it’s possible that the photographer’s studio was using old card stock past the 1930 estimated date for the stamp box.

As for the photographer (nice to have him identified on the card) he is Edgar A. Hirth, born Iowa, about 1876, per the Iowa State Census for Waukon taken in 1915.