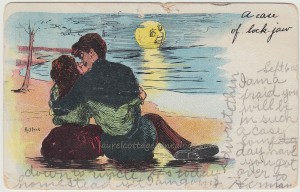 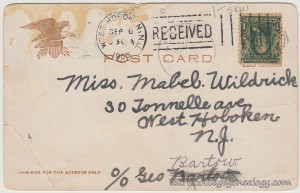 “Sept 6. I am afraid you will be in such a case some day. have you got over to homestead yet. I am going down to Uncle H’s today so write then. Herman.”

Find A Grave shows the entry for the Wildricks, and gives Susan E. Wildrick’s maiden name as Youmans. Arthur Linaberry turns out to be Susan (Youmans) Wildrick’s nephew, son of Phillip Linaberry and Martha D. Youmans. And George Bartow (the “care of” on the postcard) appears to be related on the Linaberry side, with Phillip Linaberry showing up on an Ancestry tree with the middle name of Bartow.

As for the artist, Antlers, his identity was not found. He did a whole comic series though, about mosquitoes, and those postcards, dated 1905 and 1906, are easily found at the moment for sale on eBay and other sites.